Six Queries on the Kidnap and Release of the Kankara Schoolboys

Ijaw Convention in US: State Police Will Solve Insecurity In Nigeria – Diri

Six Queries on the Kidnap and Release of the Kankara Schoolboys

"The fact that questions and mutually contradictory claims from the same government linger on after the rescue is evident of incompetence than a conspiracy."

69
VIEWS
Share on FacebookShare on TwitterShare on Whatsapp
ADVERTISEMENT

By Farooq A. Kperogi, Ph.D.

When it emerged on Thursday that the hundreds of schoolboys that were abducted from Government Science Secondary School, Kankara, were released, I was so relieved that I gave the Buhari regime an unusual pat in the back in my social media updates. 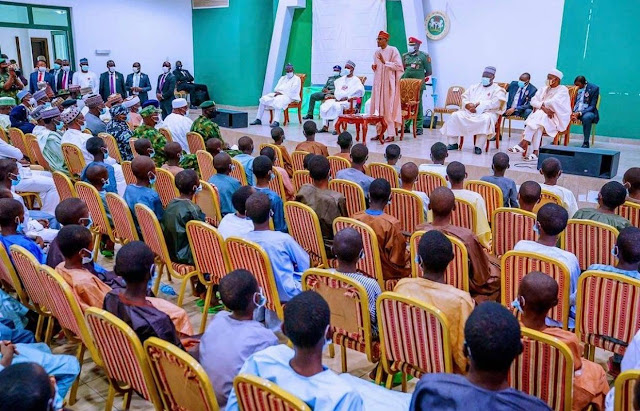 “The release of the #KankaraBoys—I don’t care at what cost—is one of the few bright spots of the Buhari regime,” I wrote. “It shows at least that the regime has learned from GEJ’s lethargy and callousness when the Chibok kidnap happened. Instead of rescuing the girls, Jonathan and his officials quibbled over whether the kidnap actually took place—and helped fertilize unhealthy and unhelpful conspiracy theories. Some of the girls are still missing.”

But after my euphoria, I’ve been grappling with several troubling questions. I will highlight just six here:

1. Who really kidnapped the boys? Was it Boko Haram or so-called Fulani bandits? The initial suspicion was that they were kidnapped by the ever-present, nihilistic, and mercenary “bandits” who have been tormenting the northwest in the last few years—and who don’t seem to be animated by any overt religious ideology.

The fact that the schoolkids appeared in a video pleading with the government to not deploy the military to find them and to discourage western education redounded to the evidence that they were in Boko Haram’s captivity, although some of the boys later told newsmen that “bandits” had told them to lie on camera that they were in Boko Haram’s captivity in order to aggrandize the abduction.

Or have “Fulani bandits” and “Kanuri Boko Haramists” merged? If so, that would be at once frighteningly ominous and socio-historically curious. It’s ominous because it would mean that the northwest and the northeast—and perhaps even parts of the northcentral—would be overwhelmed by unexampled terrorism in the coming months and years.

It would be socio-historically curious because the Kanuri and the Fulani are not only completely different people, they are—or used to be— “historical enemies.” Kanuris resisted Usman Dan Fodio’s 19th-century Jihad because they said there was nothing about their Islam, which they’d embraced since at least the 9th century before even the Fulani, that needed Dan Fodio’s “reform.”

The tensile stress that the Kanem-Borno Empire’s repudiation of Dan Fodio’s jihad actuated has been somewhat resolved through a ritualized joking relationship between the Kanuri and the Fulani who now call each other “slaves” in lighthearted jest.

But although Muslim northern Nigeria is emerging as an ethnogenesis, i.e., a new ethnic identity forged from a mishmash of multiple identities, Kanuri people still take pride in having a political identity that is independent of the Fulani-inflected caliphate. A fusion of “bandits” and Boko Haram would unleash a game-changing terroristic blitz on Nigeria.

2. How many students were kidnapped? News stories about the release of the boys quoted Governor Bello Masari as saying that 344 boys had been released. But earlier reports had said the abducted students numbered a little over 500. One of the students who escaped from his captors also said more than 500 of them had been captured. He even said some of them had been murdered by their captors. So what’s the truth?

3. Who rescued the boys? The Katsina State government said their rescue was facilitated by Miyetti Allah.But the Nigerian military on Friday contradicted the Katsina State government and insisted that the Defence Headquarters’ “Operation Hadarin Daji” was singularly responsible for the release of the boys. Since both claims can’t be simultaneously true, one is a lie.

But note that Miyetti Allah appears have officially accepted that its members are responsible for the progressive deterioration of security in the country, according to the Vanguard of December 15, which quoted the group’s president, Muhammadu Kirowa, as saying, “We cannot continue to wallow in denial when it is a fact that majority of criminals arrested across the country are from within us, our kith and kin [who] have gone into this circle because of our sheer negligence.”

If the abductors are “Fulani bandits,” it would make sense that Miyetti Allah would be more helpful in facilitating the release of the boys than the military, which is notorious for being harder on peaceful protesters than on terrorists.

4. Was ransom paid before the boys were released? The Katsina State government said no ransom was paid. It said it used moral suasion to persuade the kidnappers to release the boys. But in a rare moment of clarity on NTA on December 18, Muhammadu Buhari talked of the “settlement of the abductors.”

We all know that “settlement” means under-the-table payment in Nigerian English. I have read online rumor mills that said the abductors were “settled” with up to $4 million. While the figure may not be accurate, the government has a history of giving enormous financial war chests to terrorists.

On May 6, 2017, for instance, the Wall Street Journal reported that the Buhari regime delivered “a black duffel bag containing €2 million in plastic-wrapped cash” to Boko Haram for the release of 82 of the Chibok girls that were abducted in 2014.

Since ransom payment is a counterproductive and unsustainable security strategy, what is the government doing to ensure that this doesn’t happen again?

5. If the government can identify, negotiate with, and pay abductors, why can’t it apprehend them? If Miyetti Allah has admitted that its members are responsible for the mounting insecurity in the country and has even assisted with negotiations for the release of the abducted schoolboys, why is the group not treated, at the very least, like a “group of interest” by security forces?

Why are #EndSARS protesters, supporters, organizers, and financiers the victims of murder, bank account freezes, and continual harassment by the government while terrorists, abductors, and a self-identified association that facilitates the work of abductors featherbedded?

6. Finally, in the Kankara abduction saga, agents of government emerged as the most vicious purveyors of transparently fake news. Garba Shehu, Buhari’s spokesman, said on December 15 that “contrary to all the fake rumors [so even rumors can be “fake”?] flying around, only 10 students were kidnapped from the school in Kankara.”

Abike Dabiri also prematurely said on her verified Twitter handle that the kidnapped boys had been released. When she was called out, she lied that her Twitter and Instagram handles had been hacked, implying that it was a hacker who posted the false update.

But anyone who is malicious enough to hack anyone’s social media account won’t post from the same device and location as the original account owner and would post something more vicious than sterile government propaganda.

Since the regime, particularly its chief lying officer Lai Mohammed, is obsessed with stamping out “fake news,” what is the punishment for its agents that shared literal fake news, although Garba Shehu has apologized for his?

The absence of unambiguous answers to these queries is the biggest driver of conspiracy theories about the abduction. People who disagreed with my initial social media update claimed that the abduction was contrived to lend unearned veneer of competence to the Buhari regime.

This is, of course, silly conspiratorial reasoning. Had the regime been unable to rescue the boys, Buhari would have been justifiably excoriated for incompetence and insensitivity, which are his trademarks. In fact, he was accused precisely of that in the six days that the boys were in captivity. But having rescued them, the regime is now being accused of staging the kidnap.

Praiseworthy as the saving of the boys from captivity is—from the perspective of a parent—the fact that questions and mutually contradictory claims from the same government linger on after their rescue is more evidence of incompetence than a conspiracy.

No player is bigger than Manchester United – Solskjaer warns Pogba

No player is bigger than Manchester United - Solskjaer warns Pogba