How it started and how it is going: Four Takeaways from the Euro 2020

‘He Scores Goals Nobody Else Can Score,’ Arsene Wenger Hails Mo Salah

#EndSARS Protests: What Has Changed One Year After?

How it started and how it is going: Four Takeaways from the Euro 2020

97
VIEWS
Share on FacebookShare on TwitterShare on Whatsapp
ADVERTISEMENT

As this year’s UEFA European Football Championship draws to a close and the focus being shifted to Sunday’s epic final showdown between England and Italy, here are four takeaways from the Euro 2020.

Denmark’s campaign had started on a wrong note when their inspirational midfielder Christian Eriksen suffered a heart attack in their 1-0 loss against Finland in their opening game.

The disheartening scene had left the Dane’s in shock despite news of Eriksen convalescing. The healing players were faced with a more daunting task, a second group game against a ruthless Belgian side – only to record another disappointing defeat.

Denmark returned days later in front of a magical crowd in Copenhagen for their final group stage match. The Danes needed to beat Russia and get some help from Belgium against Finland.

And that goal was accomplished, as Denmark thrashed a disorganized Russian side 4-1, and Belgium took a 2-0 victory over the Finns. The results gave Belgium a first-place finish in Group B, with Denmark automatically qualifying in second place.

The Danes would go on to oust Wales and Czech Republic in the knock-out phases to reach the semi-final. However, there was one last outpouring of emotion as the Danes arrived back in Copenhagen after losing 2-1 in extra-time to England.

Was it a smooth sailing for the Nordic country? Of course not! But their bravery in the face of adversity was top-notch.

TheThree Lions are on the brink of ending a 55-year jinx head to back to Wembley for the Euro 2020 Final this weekend after beating Denmark in the last four.

England’s recent major tournament knockout history has been pained, to put it mildly. 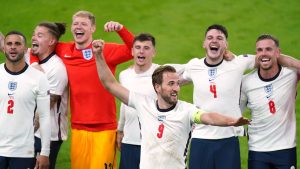 Whether it is being humbled by Iceland in Nice at Euro 2016, or knocked out on penalties by Portugal and a winking Cristiano Ronaldo at consecutive tournaments in both Euro 2004 and the 2006 World Cup.

In Moscow three years ago, England came so close to bringing football home only to come unstuck against an inspired, peaking Croatia team in the World Cup semifinal.

Football didn’t come home then, but it would be hard to argue that it hasn’t now.

Meanwhile, England entered the competition with little expectations only to reach the final unbeaten in their last 12 matches, 11 of which have ended in victory – the exception the goalless draw against Scotland on Match-day 2. And the Three Lions have only conceded once – their semi-final tie against Denmark.

Every major international tournament seems to have a group of death and this year’s European championship was no different.

When the Euro 2020 draw was done, all eyes were on Group F, the last group – which was known as the group of death and rightly so.

France, Germany and Portugal were in the same group of Hungary and everyone wrote them off before the tournament. The group had the last two World Cup winners and the defending champions of the Euros. 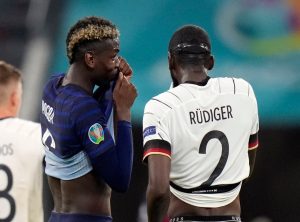 However, Hungary were just a few minutes away from going through and knocking the Germans out. The Hungarians also managed to get a surprise draw with France while Portugal did not score until the 84th minute.

In the end, Germany made it through and qualified for the last 16 with France and Portugal. The three favourites qualified (the Portuguese as one of the best thirds) and all three said goodbye in the first knockout round.

Portugugal were defeated by Belgium in Sevilla despite having more chances than their opponents, Switzerland knocked out France (competition favourites) on penalties.

And then, Germany were eliminated at Wembley by England after two second half goals from Sterling and Kane.

The Azzurri rise from World Cup failure to Euro 2020 final

Italy started the tournament as 11/1 shots with some bookies, rank outsiders – who few talked about as potential winners but the Italians are making an incredible comeback as a European force.

However, former Manchester City boss and one who has been identified as the most handsome manager at the Euros Roberto Mancini must take credit for this resurgence.

Mancini, 56, inherited an Italian team at their lowest point in May 2018, after quitting his role as coach of Russian side, Zenit St Petersburg. At the time, Italy had failed to reach World Cup finals for the first time since 1958 and had a squad which was a pale shadow compared to their glory days. 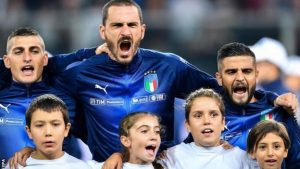 There seem to be this passion that hovers around the Italian team, and that could be seen in the manner which they recite the country’s national anthem.

Mancini has transformed Italy into a team on a 33 game unbeaten run, and on the lookout, they are drilled, defiant and determined to win the Euros despite having to ride their luck at against Spain in Tuesday’s semi-final.

While the Azzurri will be there on the final night of the competition, they will hope to extend their unbeaten run by whatever means, except losing to England.

‘He Scores Goals Nobody Else Can Score,’ Arsene Wenger Hails Mo Salah

JUST IN: Steve Bruce Steps Down From Newcastle United Job

JUST IN: First Black US Secretary Of State, Collin Powell Dies Of COVID-19 Complications Despite Being Fully Vaccinated